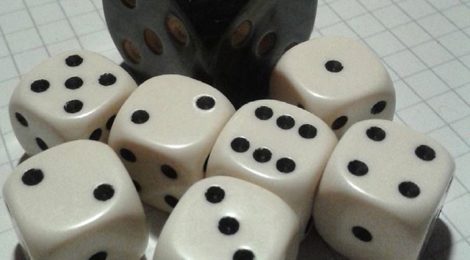 On the Illusion of Damage

Platonic Solids / September 1, 2016 / Comments Off on On the Illusion of Damage / Game Design, RPG

Lets talk about damage for a second. One of the myths that I hear a lot about is that hitpoints are a method for gauging health. I’ve also heard it put forth that hit points determine significance (the boss Ogre has more HP than the mook Ogre’s wandering about with him).

This conversation really puzzles me.

To avoid getting to ‘the roots’ conversation about wargames (and how units had 1hp) let me talk instead about the conversation that is combat.

When a game has Hit Points (or damage segments, or wound levels – but NOT, it’s important to note, Fate Consequences) the purpose of these things is unequal between the GM and the player.

The PLAYER often thinks of hit points as methods of fight capability. Looking at the monsters they see it in early editions as a goal (it has 25hp we have to get through, lets take down as much as we can in the opening volley and cleanup then get the loot!). In later editions it also serves as a function of risk/reward assessment (as HP are tied to Hit Dice).

And GMs who only follow the rules and trappings of the system look at HP as a pacing mechanism on the monster side and threat on the player facing side (dealing damage) – the risk to justify the reward.

The core problem with this is that ultimately what the game is trying to generate is reactions and a story. When you see a 30-Hit-Die creature what you feel is fear. When you see the claw come down and hit you not for a scratch but a quarter of your life, the board and the dice don’t matter – you’re feeling the threat. This illusion is at the heart of damage, and what makes combat more than just a chess match.

This is a similar case with gear. When you have a shield it’s ‘plus one armor’. When you see it wrecked and cast aside in a single blow it’s your foe becoming a worthy, dangerous adversary.

In the traditional sense the player has a doll (dressed up in armor, stats and history) and the GM has a very limited avenue by which he can mechanically influence this doll without permission and agreement: He can raise or lower hitpoints or very specific flags (stun is an on/off flag for example). But ultimately this is a very cold way (and I will venture a wrong way) of looking at hit points and gear.

Damage, and gear damage, is part of the conversation that is combat.

Damage is also an abstraction. Broken arm? Knife cut? Bullet-wound? Just knock off some HP. It provides a universal constant we can use to talk about death about without making it too visceral and gruesome. We know knives do 1d4 damage, and swords 1d10. Which makes things both less threatening and somehow less real. It provides control, and a clinical detachment for when things ostensibly go very very wrong.

Ok. So that’s the model as it stands. We can make this mathematical and clinical, but lets extend this model a bit. Damage (and the threat of damage) is just one lever that can be used to influence and guide roleplay.

Let me go into some specifics and what I’m tinkering with.

Writing World of Cyberpunk I intentionally made it so that a handgun will likely take out a person who isn’t wearing armor or cybered up. So frequently I see scientists, medics, and cat burglars go diving under tables when things go south. At the same time the folks with some combat skills (IE: street sam’s, razorgirls and the like) realize bullets are dangerous but look for their opening, and take some risks.

It’s led to some interesting behaviors. Folks avoid firefights. They bring the toughs in case things go wrong, but they rely on fixers to get them disguises, infiltrators to scout out rooms, hackers to help them avoid alarms and guards.

So World of Cyberpunk is a World of Dungeons hack and uses HP. But in thinking about how to extend this I realize that I want to address both facets of the HP model above. Of course it’s a threat/status mechanic, but in cyberpunk (much like in noir) the protagonists tend to have the poop kicked out of them.

I unrolled the harm pie chart and formalized the levels a bit. These are mostly just examples.

If you’re playing a Fixer you prefer suits, conversation and grifting to violence. So how do you react when shot?

Note that you can make the character a total non-combatant (shots will remove limbs). Or you could make your fixer more badass (Going for stims, knowing when he’s in shock). Player choice.

Now lets contrast this with the combat-monkey equivalent:

Not only are we making this playbook tougher (more health levels) but also changing their whole world-view and approach. Also we leave the choice of whether he has cyberware up to the player.

What about advances and customizability?