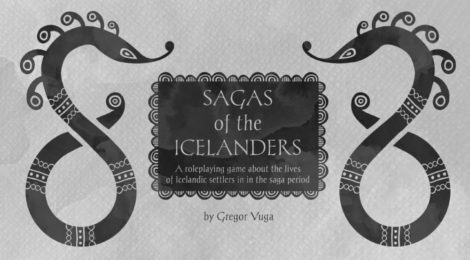 Review: Sagas of the Icelanders

Anyone that knows me, knows that I’m a big fan of Apocalypse World, but that I am pretty picky about my hacks.  I want to point out an absolutely excellent one that I don’t hear a lot of noise about: Sagas of the Icelanders. We just finished a campaign recently and I wanted to say a few words.

When I first heard of SotI as a game I wondered why someone would make a hack of AW for this. Mind you, I’m a fan of the Sagas (the actual literary ones) but it seemed like an odd topic to make a hack about.  Family life and genealogy in 10th century Iceland? Let me assure you it is excellent.The game generates some unexpected (but reliable) narrative structures:  difficult to resolve tensions that occur in fairly tight-knit groups that need to work together to survive; dooms, destinies and fates and how to bear them; fickle winds of fortune that could change at a moment’s notice sometimes shattering sessions of hard work.

Many hacks are superficial, just re-skinning AW stats, and focusing on move structure and a few playbooks.  SotI is a deep hack that really tunes the system to a fever pitch, and it plays really well (or at least that’s been my experience).

What’s awesome about it?

The first thing I look for in PbtA games is the killer new techniques that can be leveraged for hacks. Although Sagas has been around for a few years, there’s tech here that I haven’t seen used widely. I found that a lot of these mechanical choices actually made things much easier for me as the GM since the players were doing a fair share of the heavy lifting.

— Sagas has a great XP system. Advancement isn’t done through high/low or targeted rolls. Instead you have to interact with folks you have ties with. This does two things well. It requires PCs to flag who they want to interact with, and then makes the GMs job easy by incentivising them to interact with those NPCs. That’s part of what spins the game tightly back in on itself and keeps it moving.

— Great use of bonds. One thing I love is when PbtA games write tight moves with no rolls. Good moves like that help shape the fiction strongly without any game slowdown. Bonds in SotI are a great example of this. Whenever you have a relationship, it generates a bond. If you give someone a gift – you get a bond. And these bonds are spent to assist or to read a person. It’s intuitive, butter smooth, and overcomes some rough edges I’ve seen in some hacks. It gives some good shapes to fiction. PCs often make their own adventures by looking to find gifts for someone they want to impress or get close to – often giving up prized possessions for an edge. And it keeps the game flowing.

— Money. In games I usually see two types of handling of money. Either it’s overly specific (you find 10 silver pieces and two Electrum) or really, really abstract (roll Resources/Circles rating). Sagas straddles a middle ground. It gives some specifics but rolls them up into a few broad larger categories. So you can have a piece of silver, but a few pieces of silver become a handful, and a few handfuls become a pouch and so on. Additionally it showcases the economy and values of the time by providing some concrete things and how much they’re worth.

— Really Clear problems. What I really want to talk about is the fronts. Most games struggle to make fronts clear and present, but Sagas provides simple, concrete moves and frameworks that are similar to the AW fronts but because they’re concrete and grounded in real world situations they are very clear and intuitive for me to use. They helped the GM side flow more evenly for me than a number of PbtA games.

— Seasons and Time Passing. Most PbtA games are really tied to tension and the moment. Sagas, on the other hand, resolves a situation, then encourages you to jump ahead. It even has rules for generational play, where you can pick up the descendants of your current group. The seasons come with unique problems of their own, and there’s a lot of emergent play from this. Winter is hard and you have to deal with scarcity. If there’s bounty, you want to throw a party, which comes with it’s own problems and politics. Is it time for the AllThing? You know someone’s going to get in a fight and get accused and have to defend themselves.

Other Stuff to Know:

— Gendered moves. The Sagas has very specific things to say about the legal situation in Iceland, and the role of people as part of the community. Consequently the game has very strong things to say about gender roles. The playbooks are divided along gender lines, and each has moves associated only with their own gender. This shapes what you are able to do, and throws you to the whims of fate if you try and act outside your role.

— GM Heavy Lifting. Although the seasons and threats are all really clear and the players (via moves) are pushed to make their own plot and fun, the gendered moves often drop a lot of the weight on the GM. Anything you’re not supposed to do falls to testing the whims of fate (which also generate bonds the Fates gain on the PCs). While I don’t mind this, it does mean that a chunk of the game comes down to whether the GM will use those bonds to attack/punish a player (and misses can often lead to a swift death in the harsh environs of Iceland). I had to often say to myself “the fates can be cruel” to not feel like I was punishing my PCs or just being arbitrarily mean. It had to me the stink of GM fiat, which the other (more standard style) GM moves do not. I notably had an easier time with the Gods bonds since I could ken their personality more easily and thus adjudicate their bond uses more easily.

— Fuzziness on some moves. Good PbtA games have moves with clear, interesting triggers that start at a charged situation and deliver 3 interesting outcomes. If the triggers are fuzzy or unclear, it’s up to table interpretation, but the more you stray from intent the harder it is to marry outcomes to fiction. A number of the moves are a bit unclear – the long text doesn’t provide a much deeper discussion – and some really drop impossible situations in the GMs lap and then are completely hands off. I had a few nasty Seidkona rolls where she’d ask for something like the mast of a ship with no strings attached, and the move dictated she got it, but I had no idea how or why she’d get it arbitrarily in the current season. Overall, none of this was impossible to navigate, but if you’re not ready to dive in feet first it can be rough. Talk to your players, but fair warning.

— Yikes them Sheets. The sheets for Sagas are a little scary. If you’re lucky to have a copy, Jason Morningstar’s sheets with gorgeous art by Clarissa Stetson (so cool! – Clarissa’s Deviant Art) are much better. I ended up using my nascent layout skills to make some new sheets (again re-using Clarissa’s art with her permission because I love it and she’s awesome like that) which I plan to share once they’re a bit more polished.

— Character Death. Iceland was harsh, and the game isn’t super kind. You’re not competent heroes playing to their strengths. Fates are often cruel, and character death is always a very real and omnipresent danger. There are very few tricks you can pull to get lucky, and society has specific, hard, and well mechanized ways to push you into corners till you react. If you aren’t ready to have to have shitty things happen to your character, or are not ok with character death – this may not be the game for you.

← On the Illusion of Damage